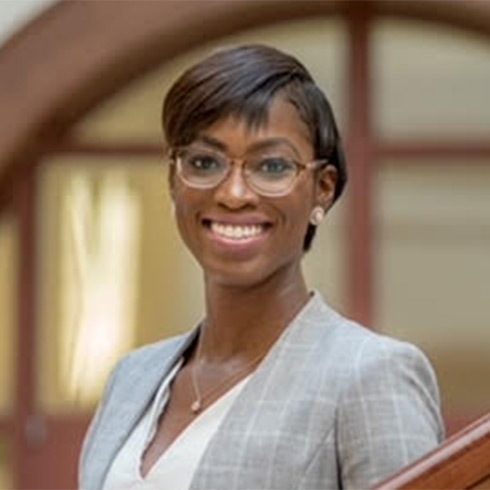 Shantè is an experienced public affairs executive, community advocate and adjunct professor. Her tenure in government, community relations, higher education and grassroots campaigns spans over 15 years and demonstrates exceptional experience and professional distinction. By training and professional principle, Shantè serves the public interest by acting as a responsible advocate to provide a voice in the marketplace of ideas, facts, and viewpoints that aid informed public debate and decision making. Her current positions and previous experience exemplify her dedication and demonstrated ability to lead others through influence and collaboration.

In her current role as Vice Chancellor for External and Governmental Relations at Rutgers University-Newark, Shantè serves as one of the chief strategic and administrative officers of the institution and advisor to the Chancellor, engaging community leaders and government officials at every level on behalf of the university while leading pursuit of legislative priorities and advancing the university’s anchor institution agenda.

For the past three years, she has been Director of Government Relations at Montclair State University, where she provided strategic direction to the University President and Executive Council and managed the university’s relationships with local, state, and federal governments. Formerly, as Senior Vice President of Business Development at Capital Impact Group (CIG), Shantè used her expertise managing policy issues in centers of power on the state and local level to leverage top tier government and public affairs resources to offer on-the-ground support as well as management of multi-state public policy and advocacy matters.

Prior to joining CIG as Senior Vice President, Shantè served as Senior Projects Specialist for U.S. Senator Cory Booker. In her capacity as Senior Projects Specialist she acted as a liaison to federal, state, and local agencies, represented the Senator at public events throughout the state, maintained networks of contacts with organizations, legislators, and community leaders, hosted events, and formed effective relationships on behalf of the Senator.  In addition, she has served as an Advisor for U.S. Senator Jeff Chiesa and as Project Specialist for the late U.S. Senator Frank Lautenberg. For all three U.S. Senator’s, Shantè was responsible for project development in the statewide issue areas she considers pillars of society: housing, education, small business, and economic development where she successfully built coalitions of supporters, advocacy groups and longstanding relationships in urban and faith communities.

Shantè began her career at the National Labor Relations Board, where for seven years she served as Compliance Specialist. She has served as Project Associate at the Center for Law and Metropolitan Equity at Rutgers Law School, Executive Board member of the Montclair NAACP, and as Board Member of HOMECorp. She taught an American Government course at Essex County College for four years and is currently the treasurer for the NJ Legislative Black Caucus Foundation. Lastly, Shantè serves as co-chair of the Montclair Covid19 Task Force.

Shantè is a proven leader with key relationships and expertise that has helped solidify her as one of New Jersey’s 50 Powerful Young Black Democrats, listed on PolitickerNJ by the New Jersey Young Democrats of America and recognized as a Powerful Women of New Jersey on Senator Wienberg’s 2019, 2020, and 2021 Women Power Lists.  Shantè is alumnus of Essex County College, Montclair State University, and received her Executive Masters in Public Administration (EMPA) from Rutgers-Newark. Shantè is lifelong resident of Montclair, NJ where she resides with her wife, two daughters, and dog.