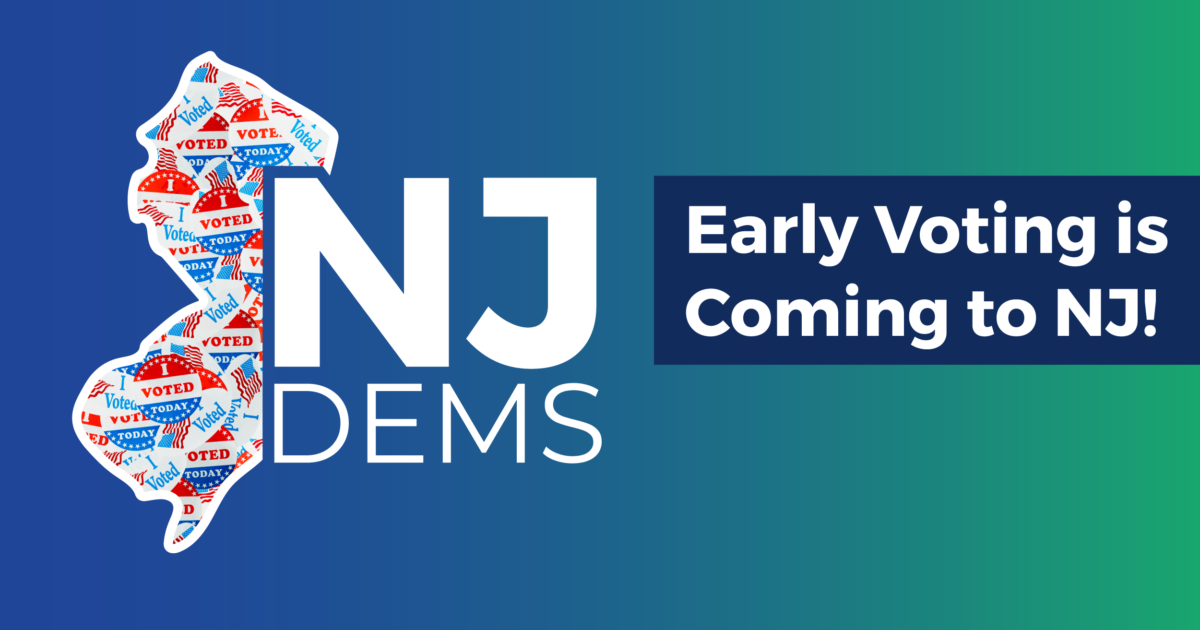 All over the country Republicans are working to disenfranchise voters with outrageous voter suppression tactics.  States like Georgia have rolled back voting rights laws, enacting strict voter identification requirements and even making it a crime to offer a bottle of water to voters waiting in line at the polls. Here in New Jersey, we know how important it is to expand access to voting — that’s why today is so exciting, because Governor Phil Murphy just signed a bill to offer Early Voting here in NJ for the first time, and he did it with Stacey Abrams in attendance.

Early Voting will be a major advance in how our elections are run that will enable more New Jerseyans to exercise their sacred right to vote. Here’s what this means for our elections:

What is Early Voting?

Early Voting allows registered voters to vote using machines at polling places before the day of certain primary and general elections in New Jersey. It expands on the state’s current Election Day voting and Vote by Mail programs, giving voters another option to make sure their voices are heard.

How Does Early Voting Work?

Each county will be required to open between three and seven Early Voting sites, depending on their population. The sites are required to be open Monday through Saturday from at least 10 AM to 8 PM, and on Sunday from at least 10 AM to 6 PM. More information will be available from each county’s Board of Elections prior to the start of Early Voting.

When Will Early Voting Be Available?

The new Early Voting system will be available for this year’s General Election in November, 2021, when the Governor and Lt. Governor, the State Legislature and many county and local offices are on the ballot. There will be nine days of early voting this Fall, including two weekends.

Why is Early Voting Important?

As Democrats, we are committed to opening up voting access as much as possible to allow more people to participate in our democracy. Over the last few years the state has met that value in several ways, from expanding vote by mail to offering online voter registration, to automatically registering new voters. Early Voting is the next step in ensuring that everyone is able to vote, especially people working jobs or with other responsibilities that make voting in person on a Tuesday difficult.

How Do We Know Early Voting is Secure?

The bill provides that each county board will be responsible for forming and executing a written plan for the security of the voting machines, ballots, and election records used during the early voting period based on guidelines established by the Secretary of State and submitted thereto no later than December 15 of each year. The written security plan is to ensure, to the greatest extent possible, the integrity of the voting process and the security of voting machines, voted ballots, and election records and materials used during the early voting period. The security plan must specify a chain of custody and security plan for voting machines and a chain of custody for the voted ballots, which must include the transfer of voted ballots to each county board of elections at the end of each early voting day for safekeeping.

This is a major milestone in the fight to expand voting rights in New Jersey, and Democrats are continuing to lead the way. Governor Murphy said it best at the event, stating: “While other states are looking to find ways to keep their citizens from voting, we have consistently worked to ensure that the voices of the people are heard. I am immensely proud to sign this legislation today and to remind the nation that our democracy wins when we open the doors of our polling places wide instead of slamming them shut.”