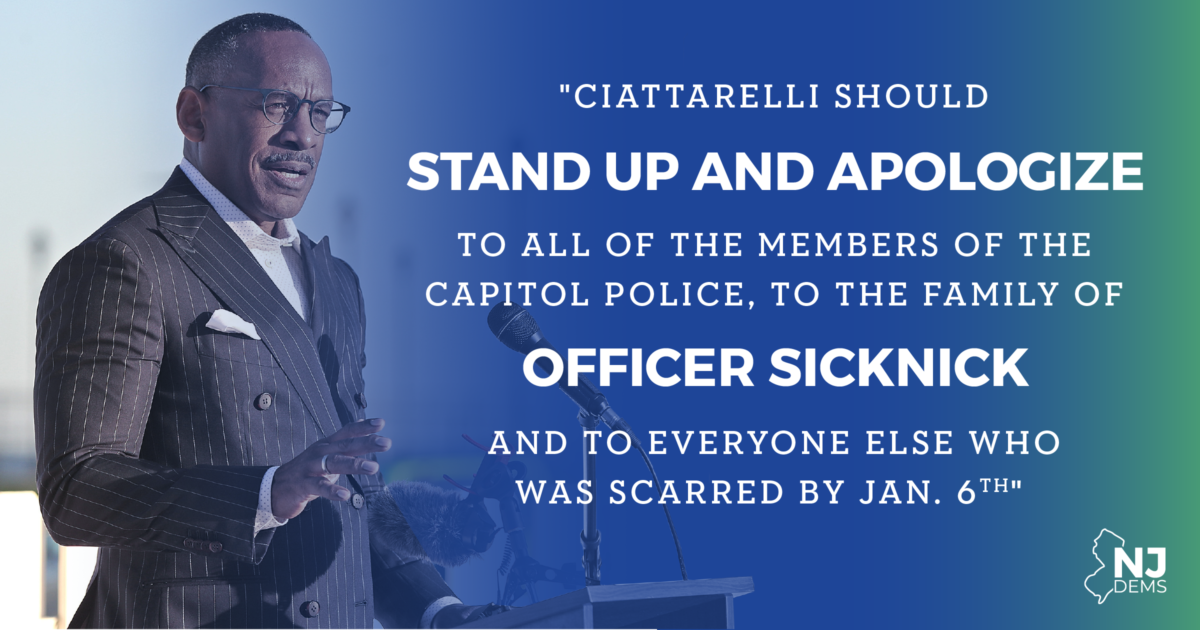 TRENTON, NJ — After gripping, emotional testimony at the first day of committee hearings on the January 6th insurrection from members of the U.S. Capitol and the D.C. police, NJDSC Chairman LeRoy J. Jones, Jr., is calling on Assemblyman Jack Ciattarelli and other Republicans who helped incite the insurrection to apologize to the officers whose lives were impacted by their embrace of extreme right-wing conspiracies. As the father of a law enforcement officer, Chairman Jones reiterated that Republicans like Assemblyman Ciattarelli had a direct role in causing the Capitol insurrection by spreading misinformation and headlining a “Stop the Steal” rally. Assemblyman Ciattarelli has also refused to disavow the candidacy of Ed Durfee in Bergen County. Durfee is a member of the right-wing militia “The Oath Keepers,” and was present at the January 6 insurrection.

“The men and women of law enforcement leave their homes every day knowing that they may face extreme danger in the line of duty, but they could never have imagined their lives being threatened by the actions of President Trump and reckless Republican politicians putting their radical agenda ahead of the officers’ safety. You can draw a straight line from actions that Republicans like Assemblyman Ciattarelli took in spreading Donald Trump’s lies to the disgusting riot that took place at the Capitol that shook our nation to its core and resulted in the death of one officer and numerous other injuries, both physical and mental. Republicans claim to support law enforcement, but their party’s total refusal to take accountability for their actions and their embrace of dangerous, far-right conspiracies makes that rhetoric ring absolutely hollow. Assemblyman Ciattarelli should stand up and apologize to all of the members of the Capitol Police, to the family of Officer Sicknick, and to everyone else who was scarred by that harrowing day. Anything less is a disqualifying refusal of his duty as a public figure and a supposed leader.”